One of the Smelliest Reasons to want to live in the Pacific Northwest! 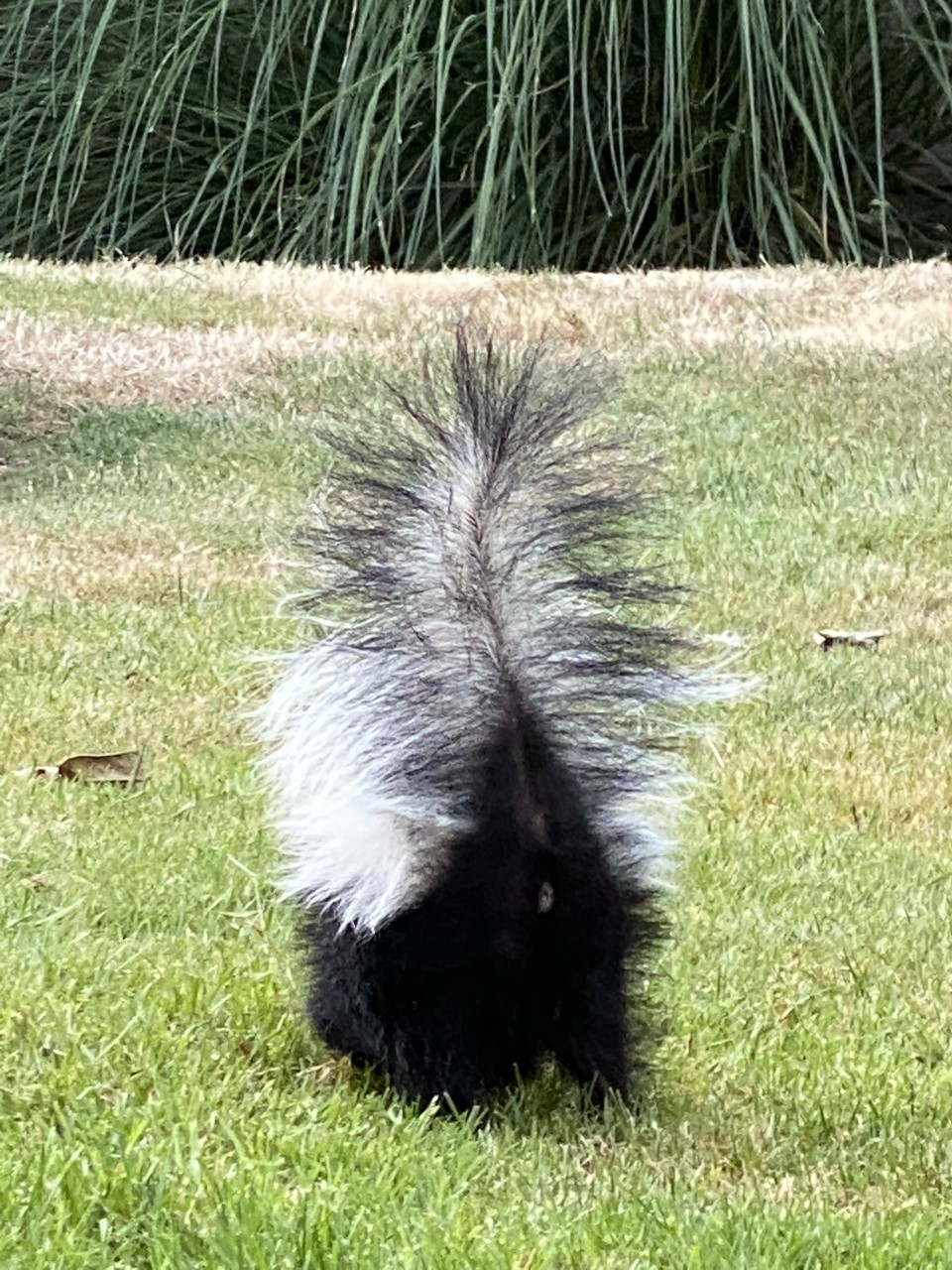 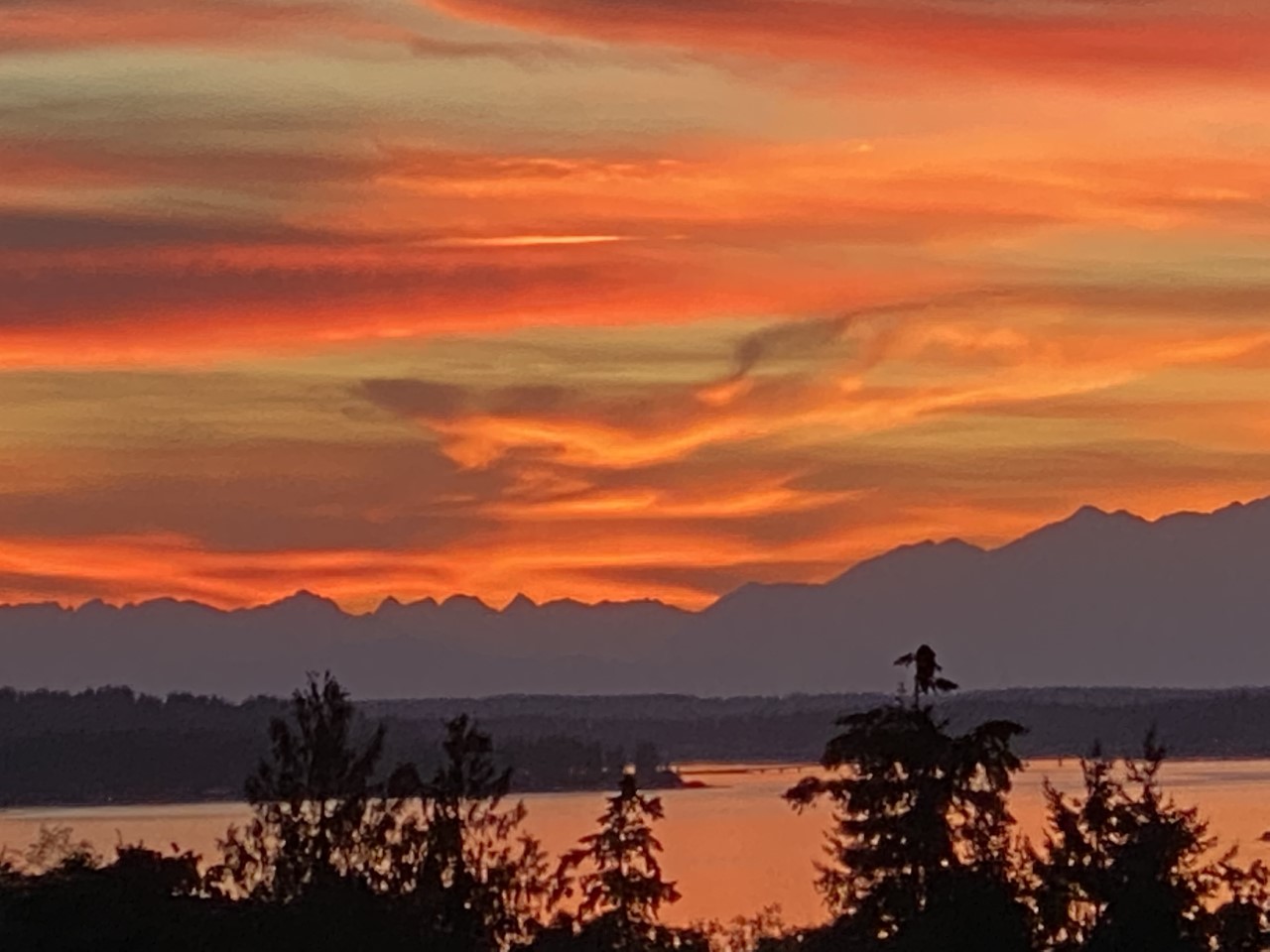 There are reasons and sequence to most everything in life. In the wee hours of this morning, roughly 2:30am, a call from “corporate security failed email attempt notification team” (scammers), awoke me. Shortly after having a private argument about wondering what time zone their automated dialing system must be enjoying, I heard what I thought were the chickens making a ruckus in the chicken coup.

After meandering outside to see what the fuss was about, all I had to do was step out the door onto the deck and SMELL what it was all about. Initially, I thought it was just my little skunk friend poking around the outside of the coup and the girls were just telling him to stay away. I was secretly overjoyed because there had been a squished baby skunk on the road nearby and I had feared it was my new ‘yard-dog’ and grub digger.

Lo and behold, there he was, the little skunky was inside the coup?!!! The fortified coup had been breached. I slowly opened the door with hope that he would make his way out just as the eldest chicken, Zillow, came running out into the dark. Zillow has had a recent knee injury and in her elderly state, has not been able to jump up onto one of the poles in the coup so typically sleeps at the top of the ramp into the doghouse where they lay their eggs. Apparently, the ruckus I heard must have been when my little skunk friend decided he was going to look for eggs, must have startled Zillow which cause her to squawk and him to squirt her. 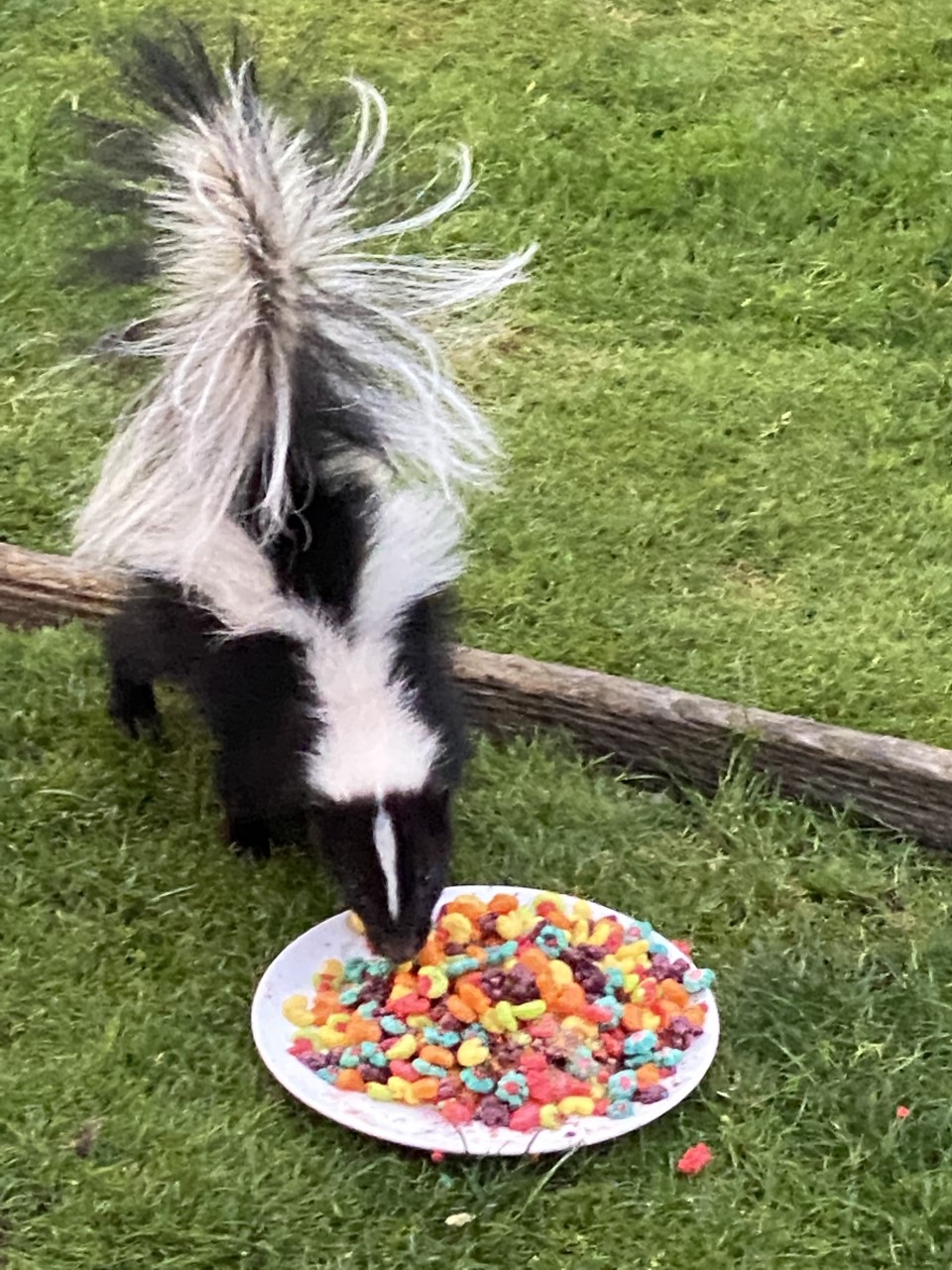 I did not know, when Zillow came darting out of the coup, and I scooped her up, she was laced with an aromatic oil that would hug me like a toddler wanting out of their napping pen. I still needed to deal with the little skunk in the coup, the other girls were safe and up high on their bars so I just needed to help him find his way out. First, I needed a safe place for smelly Zillow in the darkness. I took her up onto the deck, placed her war-warn self on top of TomTom’s cat bed next to the house. She was safe their in the dark and could rest a bit after her traumatic event. 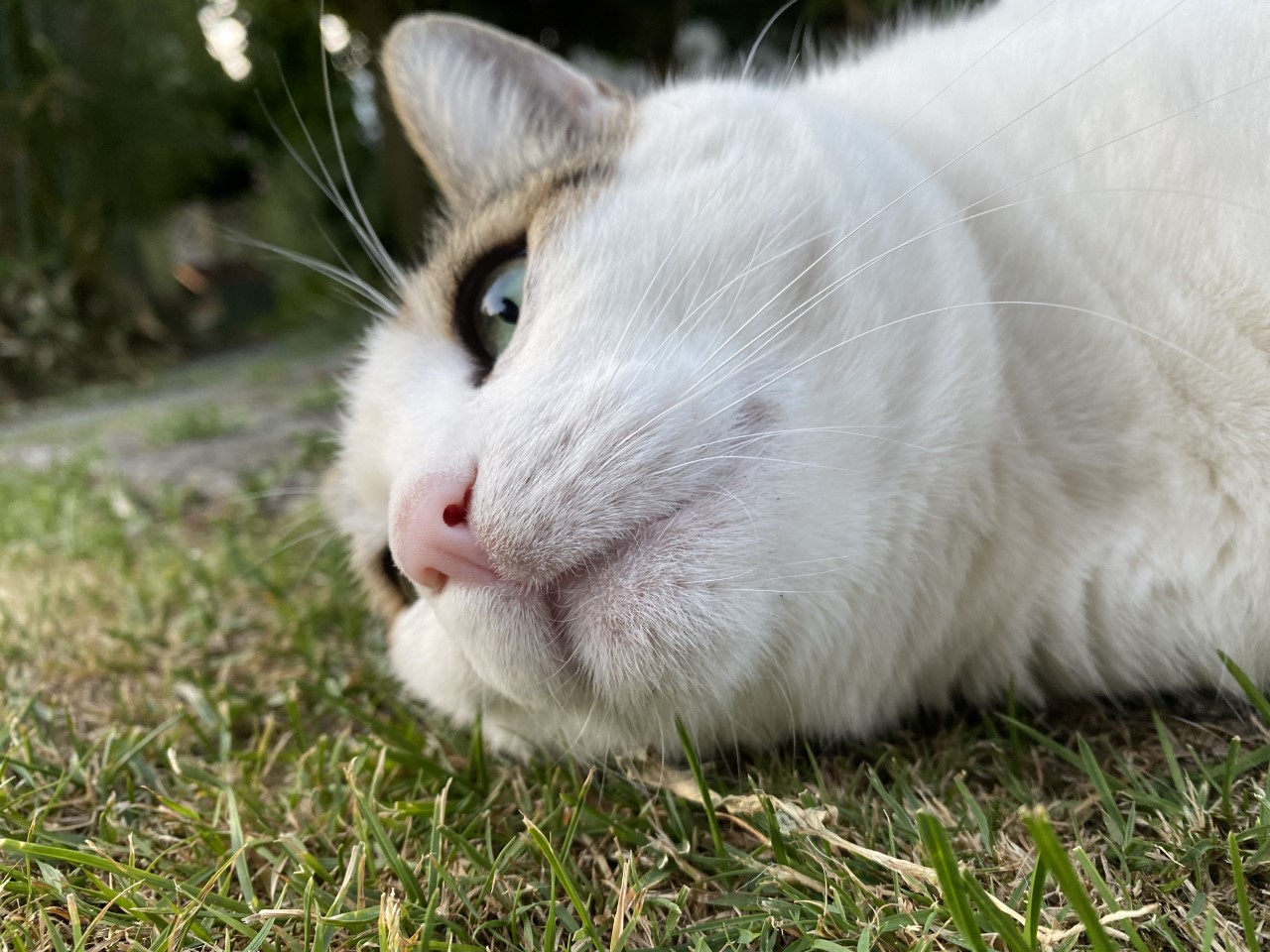 Back to the coup I went with my little rake in hand that usually props against the door flap on the coup at night. The little skunk had made his way back to the rear corner of the coup and was desperately trying to dig his way out. This is quite a fortified structure minus a couple of bar spaces where he was obviously able to squeeze in by the door. He was in a blind panic, very sad to see any animal that way. I made my way back around to that corner ducked under the bamboo to tap on the rear of the coup thinking he would scoot towards the door. NOPE, I heard the familiar ‘pfffft-pfffffft!’ I guess I did not think that through but at least I was on the outside of the coup and there was not a direct hit except for embedding more wafting oils all over the inside of the coup where the girls must sleep.

I figured I better do some additional strategizing. Now 3:30am, clear skies and a 68 degree summer morning in the Pacific Northwest. As I stood there in the dark, an orange hue from the heat lamps in the coup, I looked up. I looked up and kept looking up as I was pondering what to do next. 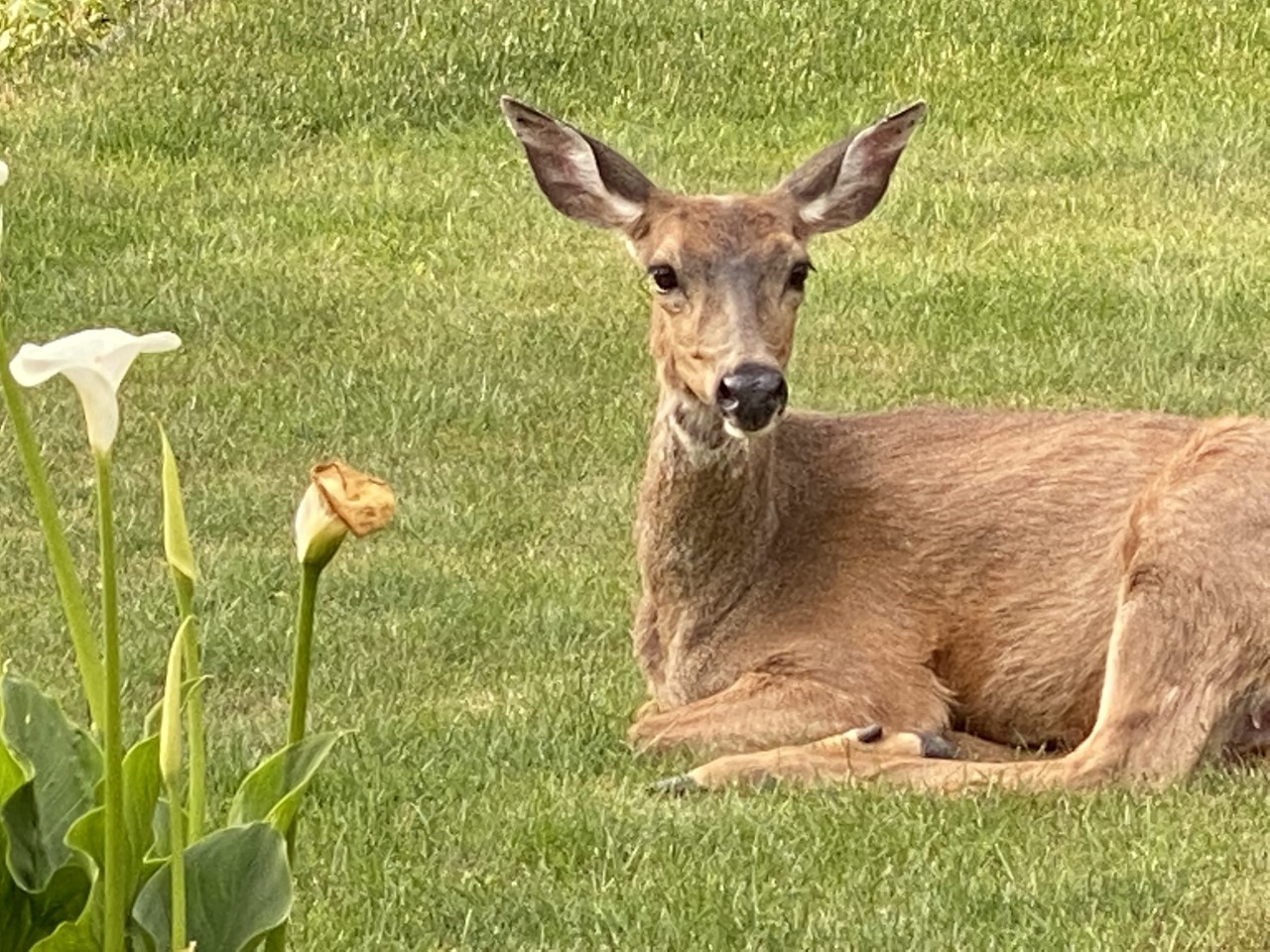 It is amazing sometimes in life, what it takes to get us to step back, take a deep breath (not too deep in the place I was at the moment) and look at the stars in quiet contemplation. As I stood there, I watched 5 separate shooting stars dart across what must be an opening in the universe. It made me think about my brother, David, who left us this very month, his birthday month, and must be able to watch this whole charade, from that opening in the universe. I thought about my Grandma, those in Law Enforcement and the Military that I knew, loved, and lost. I thought about where this world, this planet, these shooting stars, may be in a short year. I thought about how fortunate I am and will always be to live in such a magical place. So many thoughts in just 5 moments of shooting stars—time to make wishes of course, mine are always the same so it makes it easy. 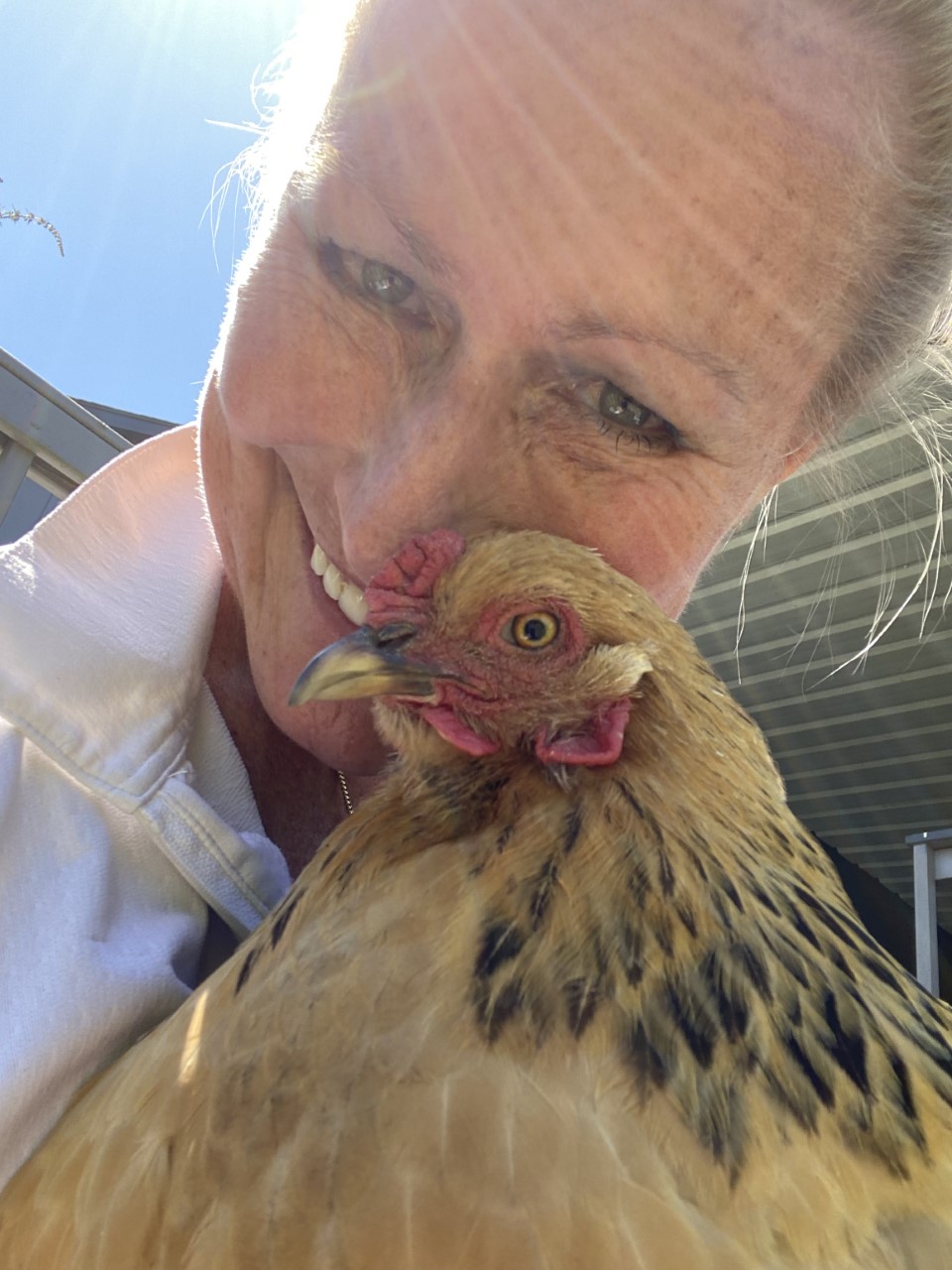 Then, I heard a small stir and was back to reality where I saw the poor little skunk was trying the same tactic to dig his way through the wires at the rear of the coup. So, I figured I would sit down on the block wall and just wait. As I sat there, out in front of me I saw some scurrying, it was the Old Norwegian Rat that seems to have decided with he endless food source in and around this yard, it will be his final spot in retirement. He made his way over to the vegetable garden (the obvious culprit for scaling the corn stocks, pealing them on the stock and eating them leaving naked cobs as a small gift of fruits in garden labor) and over to the fig tree for an early morning pick me up snack.

I noticed then how lovely I smelled, the couple of booster squirts from the skunk and poor Zillow being coated in the smelly oils as I held her tight to put her in TomTom’s cat bed, left my hair, face and hands in quite a stinky state. I apparently forgot about that as I gestured to move a piece of hair from my eye since the breeze was making it tickle my face. Word form the skunk wise, DON’T TOUCH YOUR FACE’ when you have skunk all over you!

Eventually, with a little patience and space, the little skunk finally made his way out on his own and off for the day he went—another adventure in the making no doubt.

I wonder, where else, anywhere else in the world, could I possibly live, own a home, have a garden, be surrounded by wildlife, see 5 shooting stars in one night…..no where else on the world but this Pacific Northwest Paradise! A home owner’s dream come true! 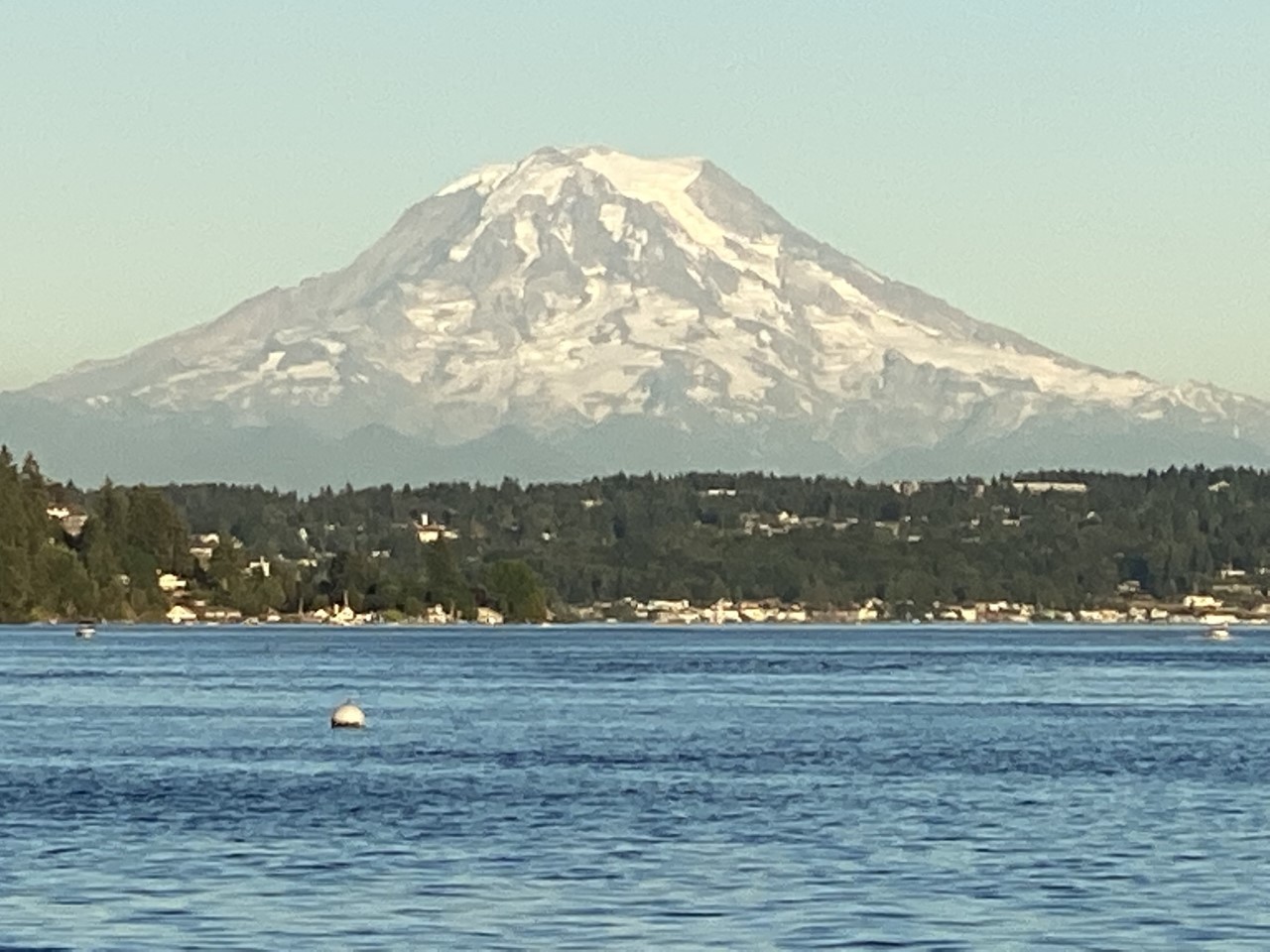 Related Articles
Acerage A home at Eagle’s Eye Level-Puyallup sanctuary Once upon a time, there was a place, not well known, where you could pass fields of blue berries, pumpkins, daffodils and tulips just before reaching a winding gravel road to a secret escape.  After reaching the top of the little gravel road, there rests a home on a hill gazing upon the Puyallup Valley […]
Real Estate Gig Harbor Territorial Paradise~4308 NW 88th Ave MLS#1118366 As history tells it, the harbors along the Puget Sound region are rich with tale of discovery, adventure and shelter.  Gig Harbor, was a hidden treasure inner harbor unveiled by explorers May 15, 1841. Lieutenant Charles Wilkes (1798-1877) had led several ships on an expedition around the world. He sent one of his ships, the […]
Home Sales What would it be like to live in a Victorian Seaport in the USA? Many, many, many years ago, there was a safe harbor on the West Coast settled in 1851 and nicknamed the ‘City of Dreams,’ and then Port Townshend (today Port Townsend) by Captain George Vancouver.  For thousands of years before this settlement, Indian Tribes were the sole inhabitants to include;  Chemakum (or Chimacum), Hoh (a group […]